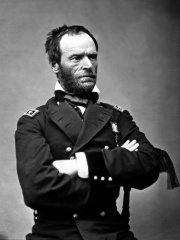 William Tecumseh Sherman ( tih-KUM-sə; February 8, 1820 – February 14, 1891) was an American soldier, businessman, educator, and author. He served as a general in the Union Army during the American Civil War (1861–1865), achieving recognition for his command of military strategy as well as criticism for the harshness of the scorched-earth policies that he implemented against the Confederate States. British military theorist and historian B. H. Liddell Hart declared that Sherman was "the first modern general".Born in Ohio into a politically prominent family, Sherman graduated in 1840 from the United States Military Academy at West Point. Read more on Wikipedia

He was a Union general during the Civil War. He is most famous for leading the March to the Sea, in which he led his troops to Savannah, Georgia and destroyed everything in his path.