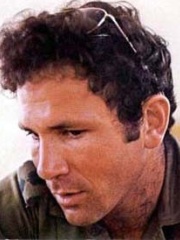 Yonatan "Yoni" Netanyahu (Hebrew: יונתן נתניהו; March 13, 1946 – July 4, 1976) was an American-born Israel Defense Forces (IDF) officer who commanded the elite commando unit Sayeret Matkal during Operation Entebbe, an operation to rescue hostages held at Entebbe Airport in Uganda in 1976. The mission was successful, with 102 of the 106 hostages rescued, but Netanyahu was killed in action—the only IDF fatality during the operation. The eldest son of the Israeli professor Benzion Netanyahu, Yonatan was born in New York City and spent much of his youth in the United States, where he attended high school. After serving in the IDF during the Six-Day War of 1967, he briefly attended Harvard University before transferring to Jerusalem's Hebrew University in 1968; soon thereafter he left his studies and returned to the IDF. Read more on Wikipedia

Yonatan Netanyahu is most famous for being the brother of Benjamin Netanyahu, the current Prime Minister of Israel.