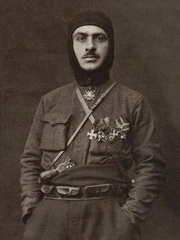 Garegin Ter-Harutyunyan (Armenian: Գարեգին Տէր Յարութիւնեան) better known by his nom de guerre Garegin Nzhdeh (Armenian: Գարեգին Նժդեհ, IPA: [ɡɑɾɛˈɡin nəʒˈdɛh]; 1 January 1886 – 21 December 1955), was an Armenian statesman and military strategist. As a member of the Armenian Revolutionary Federation, he was involved in the national liberation struggle and revolutionary activities during the First Balkan War and World War I and became one of the key political and military leaders of the First Republic of Armenia (1918–1921). He is widely admired as a charismatic national hero by Armenians.In 1921, he was a key figure in the establishment of the Republic of Mountainous Armenia, an anti-Bolshevik state that became a key factor that led to the inclusion of the province of Syunik into Soviet Armenia. Read more on Wikipedia

Among politicians, Garegin Nzhdeh ranks 4,754 out of 15,710. Before him are Giovanni Leone, Naresuan, Ashur-etil-ilani, Robert II, Duke of Burgundy, Christian August, Prince of Anhalt-Zerbst, and Gaston, Count of Eu. After him are Countess Palatine Caroline of Zweibrücken, Princess Margaretha of Saxony, Fruela I of Asturias, Bertha of Savoy, Enrico Berlinguer, and Blanche of Anjou.