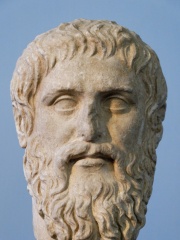 Plato ( PLAY-toe; Greek: Πλάτων Plátōn; 428/427 or 424/423 – 348/347 BC) was an ancient Greek philosopher born in Athens during the Classical period in Ancient Greece. In Athens, Plato founded the Academy, a philosophical school where he taught the philosophical doctrines that would later became known as Platonism. Plato was an innovator of the written dialogue and dialectic forms in philosophy. Read more on Wikipedia

Plato is most famous for his theory of Forms. Plato believed that the world we see is only a reflection of the true world of Forms.

Page views of Platoes by language

Among philosophers, Plato ranks 2 out of 1,081. Before him are Aristotle. After him are Socrates, Confucius, Pythagoras, René Descartes, Gautama Buddha, Immanuel Kant, Jean-Jacques Rousseau, Avicenna, John Locke, and Niccolò Machiavelli.

Others Deceased in 347 BC