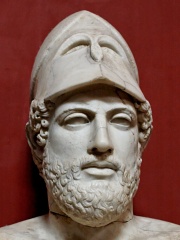 Pericles (; Greek: Περικλῆς; c. 495 – 429 BC) was a Greek politician and general during the Golden Age of Athens. He was prominent and influential in Athenian politics, particularly between the Greco-Persian Wars and the Peloponnesian War, and was acclaimed by Thucydides, a contemporary historian, as "the first citizen of Athens". Read more on Wikipedia

Pericles is most famous for his leadership of Athens during the Peloponnesian War. He is also well known for his funeral oration, which is one of the most famous speeches in history.

Page views of Pericles by language

Among politicians, Pericles ranks 43 out of 15,577. Before him are Justinian I, Richard III of England, Umar, Selim II, Franz Joseph I of Austria, and Akhenaten. After him are Maria Theresa, Ulysses S. Grant, Nero, Leon Trotsky, Peter the Great, and Franklin D. Roosevelt.

Others Deceased in 429 BC