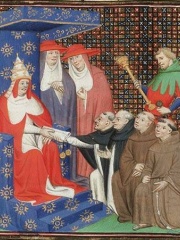 Pope Innocent IV (Latin: Innocentius IV; c. 1195 – 7 December 1254), born Sinibaldo Fieschi, was head of the Catholic Church and ruler of the Papal States from 25 June 1243 to his death in 1254.Fieschi was born in Genoa and studied at the universities of Parma and Bologna. He was considered in his own day and by posterity as a fine canonist. On the strength of this reputation, he was called to the Roman Curia by Pope Honorius III. Pope Gregory IX made him a cardinal and appointed him governor of the March of Ancona in 1235. Fieschi was elected pope in 1243 and took the name Innocent IV. Read more on Wikipedia

Pope Innocent IV is most famous for ordering the execution of the Knights Templar in 1312.

Among religious figures, Pope Innocent IV ranks 284 out of 2,272. Before him are Abu Talib ibn Abd al-Muttalib, Pope Honorius IV, Marcion of Sinope, Pope Anacletus, Demetrius of Thessaloniki, and Fethullah Gülen. After him are Pope Boniface I, Pope Benedict II, Ephrem the Syrian, Moses in Islam, Rebecca, and Barabbas.

Among people born in 1195, Pope Innocent IV ranks 2. Before him is Anthony of Padua. After him are Ivan Asen II of Bulgaria, Johannes de Sacrobosco, Xia Gui, Geoffrey II of Villehardouin, and Henry VI, Count Palatine of the Rhine. Among people deceased in 1254, Pope Innocent IV ranks 1. After him are John III Doukas Vatatzes and Conrad IV of Germany.