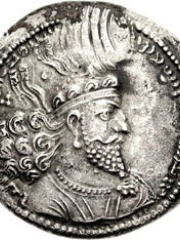 Hormizd-Ardashir, better known by his dynastic name of Hormizd I (also spelled Hormozd I or Ohrmazd I; Middle Persian: 𐭠𐭥𐭧𐭥𐭬𐭦𐭣), was the third Sasanian King of Kings (shahanshah) of Iran, who ruled from May 270 to June 271. He was the third-born son of Shapur I (r. 240–270), under whom he was governor-king of Armenia, and also took part in his father's wars against the Roman Empire. Read more on Wikipedia

Hormizd I was the founder of the Sassanian dynasty in Persia. He is most famous for his military campaigns against Rome.

Page views of Hormizd IS by language

Among politicians, Hormizd I ranks 2,808 out of 15,577. Before him are Antonín Novotný, Gotse Delchev, Anna Leopoldovna, Sigebert III, Władysław Anders, and Cao Fang. After him are Joan II, Countess of Burgundy, Uriah the Hittite, Khasekhemwy, Demetrius II Nicator, Emperor Qianshao of Han, and Juba I of Numidia.

Among people born in 250, Hormizd I ranks 13. Before him are Pope Miltiades, Pope Caius, Pope Alexander I of Alexandria, Pope Marcellinus, Carinus, and Pope Eusebius. After him are Postumus, Heliodorus of Emesa, Bahram I, Tetricus I, Bahram II, and Donatus Magnus. Among people deceased in 273, Hormizd I ranks 2. Before him is Saint Valentine. After him are Vaballathus and Cassius Longinus.