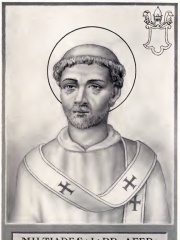 Pope Miltiades (Greek: Μιλτιάδης, Miltiádēs), also known as Melchiades the African (Μελχιάδης ὁ Ἀφρικανός Melkhiádēs ho Aphrikanós), was the bishop of Rome from 311 to his death on 10 or 11 January 314. It was during his pontificate that Emperor Constantine the Great issued the Edict of Milan (313), giving Christianity legal status within the Roman Empire. The pope also received the palace of Empress Fausta where the Lateran Palace, the papal seat and residence of the papal administration, would be built. Read more on Wikipedia

Pope Miltiades was most famous for being the first pope to be martyred.

Among religious figures, Pope Miltiades ranks 456 out of 2,272. Before him are Hugues de Payens, Denis, Pope Sisinnius, Rabbi Akiva, Ahmed Yassin, and Eric IX of Sweden. After him are Rashi, Genevieve, Antipope Clement VII, Micah, John Wesley, and Rose of Lima.