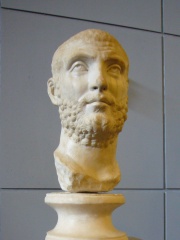 Marcus Aurelius Carinus (died 285) was Roman emperor from 283 to 285. The elder son of emperor Carus, he was first appointed Caesar and in the beginning of 283 co-emperor of the western portion of the empire by his father. Read more on Wikipedia

Carinus was a Roman emperor from 282 to 285. He was the second son of Carus, a military commander who served as co-emperor with his father from 282 to 283.

Page views of Carinuses by language

Among politicians, Carinus ranks 1,734 out of 15,710. Before him are Hor-Aha, Urho Kekkonen, Magnus IV of Sweden, Djet, Emperor Wen of Han, and Kubrat. After him are Constans, Henry, King of Portugal, William V, Prince of Orange, Maria II of Portugal, Zhengde Emperor, and Jehoash of Judah.