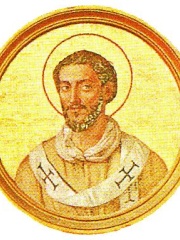 Pope Caius (died 22 April 296), also called Gaius, was the bishop of Rome from 17 December 283 to his death in 296. Little information on Caius is available except that given by the Liber Pontificalis, which relies on a legendary account of the martyrdom of Susanna of Rome for its information. According to legend, Caius baptized the men and women who had been converted by Tiburtius (who is venerated with Susanna) and Castulus. Read more on Wikipedia

Pope Caius is most famous for the Donation of Constantine. This document was a fake, and was created in the 8th century. It claimed that Emperor Constantine gave the Western Roman Empire to Pope Sylvester I.

Among religious figures, Pope Caius ranks 496 out of 2,238. Before him are Pope Silverius, Ahmed Yassin, Korah, Peter the Hermit, Pope Stephen I, and Pope Miltiades. After him are Saint Eustace, Eric IX of Sweden, Jethro, Saint Marinus, Pope Eleutherius, and Sabbas the Sanctified.