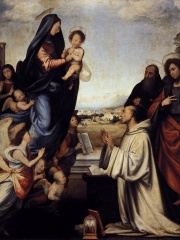 Fra Bartolomeo or Bartolommeo (UK: , US: , Italian: [bartolo(m)ˈmɛːo]; 28 March 1472 – 31 October 1517), also known as Bartolommeo di Pagholo, Bartolommeo di S. Marco, and his original nickname Baccio della Porta, was an Italian Renaissance painter of religious subjects. He spent all his career in Florence until his mid-forties, when he travelled to work in various cities, as far south as Rome. He trained with Cosimo Rosselli and in the 1490s fell under the influence of Savonarola, which led him to become a Dominican friar in 1500, renouncing painting for several years. Read more on Wikipedia

Fra Bartolomeo was a Dominican friar and painter from the Italian Renaissance. He is most famous for his paintings of religious subjects.

Among people born in 1472, Fra Bartolomeo ranks 4. Before him are Lucas Cranach the Elder, Bianca Maria Sforza, and Piero the Unfortunate. After him are Wang Yangming, Guidobaldo da Montefeltro, Simon of Trent, Marie of Luxembourg, Countess of Vendôme, Érard de la Marck, and Blanche of Montferrat. Among people deceased in 1517, Fra Bartolomeo ranks 3. Before him are Luca Pacioli and Maria of Aragon, Queen of Portugal. After him are Hersekzade Ahmed Pasha, Francisco Jiménez de Cisneros, Catherine of Navarre, Gioffre Borgia, Heinrich Isaac, Dayan Khan, Tuman bay II, Cima da Conegliano, and Francesco Francia.