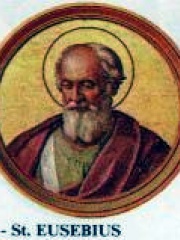 Pope Eusebius was the bishop of Rome from 18 April 310 until his death on 17 August 310. Difficulty arose, as in the case of his predecessor, Marcellus I, out of Eusebius's attitude toward the lapsi. Eusebius maintained the attitude of the Roman Church, adopted after the Decian persecutions (250–51), that the apostates should not be forever debarred from ecclesiastical communion, but readmitted after doing proper penance. Read more on Wikipedia

Pope Eusebius is most famous for his work as a historian. He was the first person to compile a complete history of the Christian Church.

Among people born in 250, Pope Eusebius ranks 12. Before him are Saint Florian, Pope Miltiades, Pope Caius, Pope Alexander I of Alexandria, Pope Marcellinus, and Carinus. After him are Hormizd I, Postumus, Heliodorus of Emesa, Bahram I, Tetricus I, and Bahram II. Among people deceased in 310, Pope Eusebius ranks 2. Before him is Maximian. After him are Emperor Ōjin and Liu Yuan.