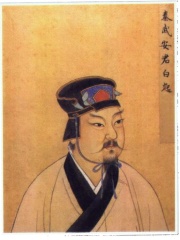 Bai Qi (Chinese: 白起; c. 332 BC – 257 BC), also known as Gongsun Qi (公孫起), was a Chinese military general of the Qin state during the Warring States period. Born in Mei (present-day Mei County, Shaanxi), Bai Qi served as the commander of the Qin army for more than 30 years, being responsible for the deaths of over one million, earning him the nickname Ren Tu (人屠; lit. 'human butcher'). According to the Shiji, he seized more than 73 cities from the other six hostile states, and to date no record has been found to show that he suffered a single defeat throughout his military career. Read more on Wikipedia

Since 2007, the English Wikipedia page of Bai Qi has received more than 479,437 page views. His biography is available in 19 different languages on Wikipedia (up from 18 in 2019). Bai Qi is the 217th most popular military personnel (up from 224th in 2019), the 142nd most popular biography from China and the 13th most popular Chinese Military Personnel.

Bai qi is most famous for its ability to promote blood circulation and strengthen the immune system.

Others Deceased in 257 BC