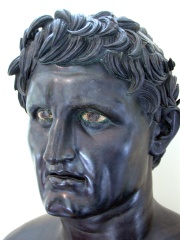 Seleucus I Nicator (; c. 358 BC – September 281 BC; Ancient Greek: Σέλευκος Νικάτωρ, romanized: Séleukos Nikátōr, lit. 'Seleucus the Victor') was a Greek general and one of the Diadochi, the rival generals, relatives, and friends of Alexander the Great who fought for control over his empire after his death. Having previously served as an infantry general under Alexander the Great, he eventually assumed the title of basileus (king) and established the Seleucid Empire, one of the major powers of the Hellenistic world, which controlled most of Asia Minor, Syria, Mesopotamia, and the Iranian Plateau until overcome by the Roman Republic and Parthian Empire in the late second and early first centuries BC. After the death of Alexander in June 323 BC, Seleucus initially supported Perdiccas, the regent of Alexander's empire, and was appointed Commander of the Companions and chiliarch at the Partition of Babylon in 323 BC. However, after the outbreak of the Wars of the Diadochi in 322, Perdiccas' military failures against Ptolemy in Egypt led to the mutiny of his troops in Pelusium. Perdiccas was betrayed and assassinated in a conspiracy by Seleucus, Peithon and Antigenes in Pelusium sometime in either 321 or 320 BC. Read more on Wikipedia

Seleucus I Nicator is most famous for his military victories in the east. He was the founder of the Seleucid Empire, which was one of the most powerful empires of the Hellenistic world.

Page views of Seleucus I Nicators by language

Others Deceased in 281 BC