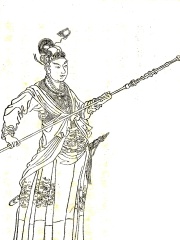 Han Xin (simplified Chinese: 韩信; traditional Chinese: 韓信; pinyin: Hán Xìn; Wade–Giles: Han2Hsin4; 231/230–196 BC) was a Chinese military general and politician who served Liu Bang during the Chu–Han Contention and contributed greatly to the founding of the Han dynasty. Han Xin was named as one of the "Three Heroes of the early Han dynasty" (Chinese: 漢初三傑), along with Zhang Liang and Xiao He. Han Xin is best remembered as a brilliant military leader for the strategies and tactics he employed in warfare, some of which became the origins of certain Chinese idioms, he was undefeated in battle and for his accomplishments he was considered the "God of War". Read more on Wikipedia

Since 2007, the English Wikipedia page of Han Xin has received more than 425,398 page views. His biography is available in 18 different languages on Wikipedia. Han Xin is the 215th most popular military personnel (up from 228th in 2019), the 135th most popular biography from China (up from 149th in 2019) and the 12th most popular Chinese Military Personnel.

Han Xin was a general who served Liu Bang, the founder of the Han dynasty. He is most famous for his ability to win battles and his mastery of military strategy.

Others Deceased in 196 BC