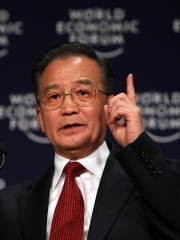 Wen Jiabao (born 15 September 1942), also spelled as Wen Chia-pao, is a retired Chinese politician who served as the sixth Premier of the State Council of the People's Republic of China and served as China's head of government for a decade between 2003 and 2013. In his capacity as Premier, Wen was regarded as the leading figure behind Beijing's economic policy. Read more on Wikipedia

Wen Jiabao is most famous for being the first Premier of the People's Republic of China.

Among politicians, Wen Jiabao ranks 1,952 out of 15,577. Before him are Marie François Sadi Carnot, Sahure, Abbas II of Persia, Hyeonjong of Joseon, Ahaziah of Judah, and Lothair II. After him are Sancho I of Portugal, Muwatalli II, Klaus Iohannis, Rugila, Ahmed Hassan al-Bakr, and Vittorio Emanuele, Prince of Naples.