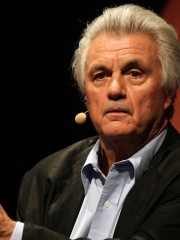 John Winslow Irving (born John Wallace Blunt Jr.; March 2, 1942) is an American-Canadian novelist and screenwriter. Irving achieved critical and popular acclaim after the international success of The World According to Garp in 1978. Many of Irving's novels, including The Cider House Rules (1985), A Prayer for Owen Meany (1989), and A Widow for One Year (1998), have been bestsellers. Read more on Wikipedia

John Irving is a novelist who is most famous for his novels "The World According to Garp" and "A Prayer for Owen Meany."

Among writers, John Irving ranks 644 out of 5,794. Before him are Vātsyāyana, Columella, Jean Froissart, Hind bint Utbah, Carlo Gozzi, and Meera. After him are Camilo José Cela, Poliziano, Aratus, Nikolay Chernyshevsky, Ryszard Kapuściński, and Jin Yong.