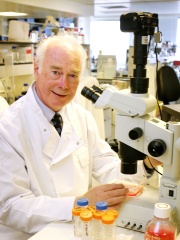 Sir Martin John Evans (born 1 January 1941) is an English biologist who, with Matthew Kaufman, was the first to culture mice embryonic stem cells and cultivate them in a laboratory in 1981. He is also known, along with Mario Capecchi and Oliver Smithies, for his work in the development of the knockout mouse and the related technology of gene targeting, a method of using embryonic stem cells to create specific gene modifications in mice. In 2007, the three shared the Nobel Prize in Physiology or Medicine in recognition of their discovery and contribution to the efforts to develop new treatments for illnesses in humans.He won a major scholarship to Christ's College, Cambridge at a time when advances in genetics were occurring there and became interested in biology and biochemistry. Read more on Wikipedia