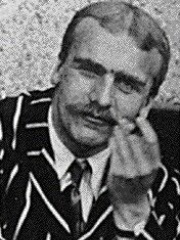 John Burdon Sanderson Haldane (; 5 November 1892 – 1 December 1964), nicknamed "Jack" or "JBS", was a British scientist known for his works in physiology, genetics, evolutionary biology, and mathematics. With innovative use of statistics in biology, he was one of the founders of neo-Darwinism. Haldane's article on abiogenesis in 1929 introduced the "primordial soup theory", which became the foundation for the concept of the chemical origin of life. Read more on Wikipedia

Haldane is most famous for his work in population genetics. He is credited with the first mathematical analysis of population growth and he was one of the first scientists to propose that natural selection could be a significant force in evolution.

Page views of J. B. S. Haldanes by language