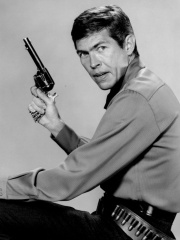 James Harrison Coburn III (August 31, 1928 – November 18, 2002) was an American film and television actor who was featured in more than 70 films, largely action roles, and made 100 television appearances during a 45-year career.Coburn was a capable, rough-hewn leading man, whose toothy grin and lanky physique made him a perfect tough guy in numerous leading and supporting roles in Westerns and action films, such as The Magnificent Seven, Hell Is for Heroes; The Great Escape; Charade, Our Man Flint, In Like Flint, The President's Analyst, Hard Times, Duck, You Sucker!, Pat Garrett and Billy the Kid, and Cross of Iron. In 1998, Coburn won an Academy Award for his supporting role as Glen Whitehouse in Affliction. Read more on Wikipedia

James Coburn is most famous for his roles in films such as "The Magnificent Seven" and "Pat Garrett and Billy the Kid."