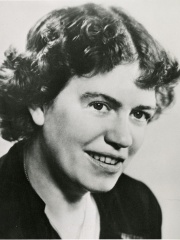 Margaret Mead (December 16, 1901 – November 15, 1978) was an American cultural anthropologist who featured frequently as an author and speaker in the mass media during the 1960s and the 1970s.She earned her bachelor's degree at Barnard College of Columbia University and her M.A. and Ph.D. degrees from Columbia. Mead served as President of the American Association for the Advancement of Science in 1975.Mead was a communicator of anthropology in modern American and Western culture and was often controversial as an academic. Her reports detailing the attitudes towards sex in South Pacific and Southeast Asian traditional cultures influenced the 1960s sexual revolution. Read more on Wikipedia

Margaret Mead is most famous for her work in cultural anthropology. She was one of the first anthropologists to study different cultures around the world. Mead's most famous work is "Coming of Age in Samoa" which she published in 1928.

Among ANTHROPOLOGISTS In United States