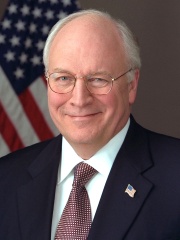 Richard Bruce Cheney ( CHAY-nee; born January 30, 1941) is an American politician and businessman who served as the 46th vice president of the United States from 2001 to 2009 under George W. Bush. He has been cited as the most powerful vice president in American history. He is also one of the most unpopular politicians in the history of the U.S., holding an approval rating of just 13% at the time of leaving office.Born in Lincoln, Nebraska, Cheney grew up there and later in Casper, Wyoming. Read more on Wikipedia

Among politicians, Dick Cheney ranks 800 out of 15,710. Before him are Jeroboam, Ælla of Northumbria, Cato the Younger, Magnus Maximus, John of Bohemia, and Fahd of Saudi Arabia. After him are Ivan VI of Russia, Nur ad-Din, Gordian III, Scipio Aemilianus, Maxentius, and Henry III, Holy Roman Emperor.