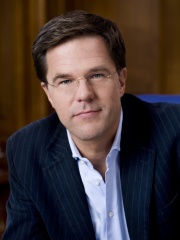 Mark Rutte (Dutch: [ˈmɑr(ə)k ˈrʏtə] (listen); born 14 February 1967) is a Dutch politician serving as Prime Minister of the Netherlands since 2010 and Leader of the People's Party for Freedom and Democracy (VVD) since 2006. After a business career working for Unilever, Rutte entered politics in 2002 on his appointment as State Secretary for Social Affairs and Employment by Prime Minister Jan Peter Balkenende of the Christian Democratic Appeal (CDA), after a coalition agreement guaranteed the VVD several seats in the cabinet. Rutte was subsequently elected to the House of Representatives at the 2003 election. Read more on Wikipedia

Mark Rutte is most famous for being the Prime Minister of the Netherlands. He is also the leader of the People's Party for Freedom and Democracy (VVD).