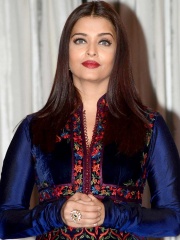 Aishwarya Rai Bachchan (born 1 November 1973) is an Indian actress and the winner of the Miss World 1994 pageant. Through her successful acting career, she has established herself as one of the most popular and influential celebrities in India. Rai has received numerous accolades, including two Filmfare Awards, and was honoured with the Padma Shri by the Government of India in 2009 and the Ordre des Arts et des Lettres by the Government of France in 2012. Read more on Wikipedia

Since 2007, the English Wikipedia page of Aishwarya Rai has received more than 11,878,367 page views. Her biography is available in 96 different languages on Wikipedia making her the 1,877th most popular actor.