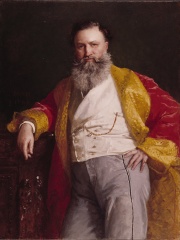 Isaac Merritt Singer (October 27, 1811 – July 23, 1875) was an American inventor, actor, and businessman. He made important improvements in the design of the sewing machine and was the founder of what became one of the first American multi-national businesses, the Singer Sewing Machine Company.Many others, including Walter Hunt and Elias Howe, had patented sewing machines before Singer, but his success was based on the practicality of his machine, the ease with which it could be adapted to home use and its availability on an installments payment basis.Singer died in 1875, a millionaire dividing his $13 million fortune unequally among 20 of his living children by his wives and various mistresses, although one son, who had supported his mother in her divorce case against Singer, received only $500. Read more on Wikipedia

Isaac Singer is most famous for his short stories. His best known work is "Yentl, the Yeshiva Boy" which is a story about a girl who disguises herself as a boy to go to a Jewish school that would not allow girls.