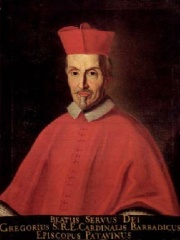 Gregorio Giovanni Gaspare Barbarigo (16 September 1625 – 18 June 1697) was an Italian Roman Catholic cardinal who served as the Bishop of Bergamo and later as the Bishop of Padua. He was a frontrunner in both the 1689 and 1691 papal conclaves as he had distinguished himself for his diplomatic and scholastic service. He became a noted scholar for his distinguished learning and as an able pastor for his careful attention to pastoral initiatives and frequent parish visitations.Barbarigo's beatification was celebrated in 1761 under Pope Clement XIII, while Pope John XXIII canonized the late cardinal in 1960; the latter pope held Barbarigo as a great role model and fostered a devotion to him since the pope had hailed from Bergamo. Read more on Wikipedia