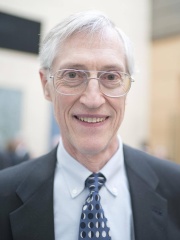 John Cromwell Mather (born August 7, 1946, Roanoke, Virginia) is an American astrophysicist, cosmologist and Nobel Prize in Physics laureate for his work on the Cosmic Background Explorer Satellite (COBE) with George Smoot. This work helped cement the big-bang theory of the universe. According to the Nobel Prize committee, "the COBE-project can also be regarded as the starting point for cosmology as a precision science."Mather is a senior astrophysicist at the NASA Goddard Space Flight Center (GSFC) in Maryland and adjunct professor of physics at the University of Maryland College of Computer, Mathematical, and Natural Sciences. Read more on Wikipedia