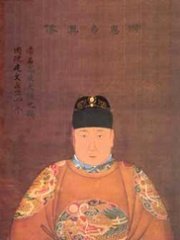 The Jianwen Emperor (Chinese: 建文帝; pinyin: Jiànwén Dì; born 5 December 1377, disappeared from 13 July 1402) was the second Emperor of the Ming dynasty, reigned from 1398 to 1402. His personal name was Zhu Yunwen (朱允炆). The era name of his reign, Jianwen, means "establishing civility" and represented a sharp change in tone from Hongwu ("vastly martial"), the era name of the reign of his grandfather and predecessor, the Hongwu Emperor. Read more on Wikipedia

Since 2007, the English Wikipedia page of Jianwen Emperor has received more than 215,836 page views. His biography is available in 39 different languages on Wikipedia making him the 1,350th most popular politician.

Among politicians, Jianwen Emperor ranks 1,344 out of 14,801. Before him are Cleopatra Selene II, Ferdinand I of Aragon, Alexander Farnese, Duke of Parma, Zacchaeus, Magnus Maximus, and Sejo of Joseon. After him are Cyrus I, Giulio Andreotti, Briseis, Leonid Kuchma, Ramiz Alia, and Maximinus II.

Among people born in 1377, Jianwen Emperor ranks 2. Before him is Filippo Brunelleschi. After him are Shah Rukh, Ernest, Duke of Austria, Ladislaus of Naples, Emperor Go-Komatsu, Đurađ Branković, Louis II of Anjou, Süleyman Çelebi, Oswald von Wolkenstein, Afonso I, Duke of Braganza, and Albert IV, Duke of Austria. Among people deceased in 1402, Jianwen Emperor ranks 1. After him are Gian Galeazzo Visconti and Edmund of Langley, 1st Duke of York.