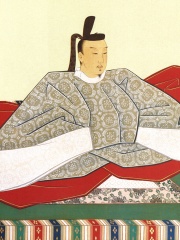 Emperor Go-Komatsu (後小松天皇, Go-Komatsu-tennō, 1 August 1377 – 1 December 1433) was the 100th emperor of Japan, according to the traditional order of succession, and the sixth and final Emperor of the Northern Court. He is officially considered to have been the Northern pretender from May 24, 1382 to October 21, 1392, when upon Emperor Go-Kameyama's abdication, Go-Komatsu is understood to have been a legitimate emperor (the 100th sovereign) from that date. In 1392, following the post-Nanboku-chō unification of the two formerly contending courts, the Southern Emperor Emperor Go-Kameyama reached an agreement with Go-Komatsu to alternate control of the throne between the Northern and Southern courts on a ten-year plan which effectively signaled the end of the southern court's claims to sovereignty. Read more on Wikipedia

Since 2007, the English Wikipedia page of Emperor Go-Komatsu has received more than 148,864 page views. His biography is available in 29 different languages on Wikipedia. Emperor Go-Komatsu is the 4,753rd most popular politician (up from 4,829th in 2019).

Among politicians, Emperor Go-Komatsu ranks 4,753 out of 15,577. Before him are Ablai Khan, Emperor Shun of Han, Armand-Augustin-Louis de Caulaincourt, Magnus, Duke of Holstein, Dinmukhamed Kunaev, and Fuchai. After him are Bernhard Rust, Anton Florian, Prince of Liechtenstein, Yuya, Lugalbanda, Miguel de la Madrid, and Alexander Pechersky.

Among people born in 1377, Emperor Go-Komatsu ranks 10. Before him are Ernest, Duke of Austria, Ladislaus of Naples, Süleyman Çelebi, Đurađ Branković, Louis II of Anjou, and Albert IV, Duke of Austria. After him are Afonso I, Duke of Braganza and Oswald von Wolkenstein. Among people deceased in 1433, Emperor Go-Komatsu ranks 4. Before him are Zheng He, John I of Portugal, and Lê Lợi. After him are Lidwina, Baysunghur, Joan of France, Duchess of Brittany, and Nicholas II Garai.