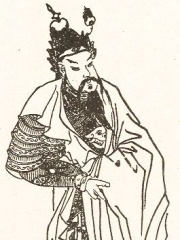 Zhao Yun (Chinese: 趙雲 pronunciation ) (died 229), courtesy name Zilong (子龍), was a military general who lived during the late Eastern Han dynasty and early Three Kingdoms period of China. Originally a subordinate of the northern warlord Gongsun Zan, Zhao Yun later came to serve another warlord, Liu Bei, and had since accompanied him on most of his military exploits, from the Battle of Changban (208) to the Hanzhong Campaign (217–219). He continued serving in the state of Shu Han – founded by Liu Bei in 221 – in the Three Kingdoms period and participated in the first of the Northern Expeditions until his death in 229. Read more on Wikipedia

Since 2007, the English Wikipedia page of Zhao Yun has received more than 1,131,235 page views. His biography is available in 24 different languages on Wikipedia. Zhao Yun is the 123rd most popular military personnel (down from 87th in 2019), the 73rd most popular biography from China (down from 52nd in 2019) and the 6th most popular Chinese Military Personnel.

Zhao Yun is most famous for his role in the Battle of Red Cliffs, where he helped Liu Bei escape from Cao Cao's forces.