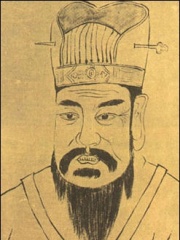 Wang Mang (Chinese: 王莽) (45 BC – 6 October 23 CE), courtesy name Jujun (Chinese: 巨君; pinyin: Jùjūn), was the founder and the only emperor of the short-lived Chinese Xin dynasty. He was originally an official and consort kin of the Han dynasty and later seized the throne in 9 CE. The Han dynasty was restored after his overthrow, and his rule marked the separation between the Western Han dynasty (before Xin) and Eastern Han dynasty (after Xin). Traditional Chinese historiography viewed Wang as a tyrant and usurper, while more recently, some historians have portrayed him as a visionary and selfless social reformer. Read more on Wikipedia

Wang Mang was most famous for the short-lived Xin Dynasty, which lasted from 9 to 23 AD.

Among politicians, Wang Mang ranks 1,123 out of 15,577. Before him are Stephen, King of England, Jungjong of Joseon, Ur-Nammu, Eric Bloodaxe, Vidkun Quisling, and Ilham Aliyev. After him are Piero di Cosimo de' Medici, Idris of Libya, Albert II of Germany, William II of the Netherlands, Zine El Abidine Ben Ali, and Anna of Austria, Queen of Spain.

Others Born in 45 BC