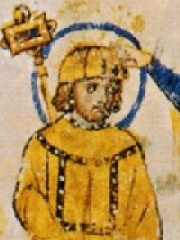 Michael I Rangabe (Greek: Μιχαὴλ Ῥαγγαβέ; c. 770 – 11 January 844) was Byzantine emperor from 811 to 813. Michael was the son of the patrician Theophylact Rhangabe, the admiral of the Aegean fleet. Read more on Wikipedia

Michael I Rangabe was a Byzantine emperor who ruled from 811-813. He is most famous for being a ruler of the Byzantine Empire during the Macedonian dynasty.

Page views of Michael I Rangabes by language

Among politicians, Michael I Rangabe ranks 895 out of 15,710. Before him are William III of the Netherlands, Julius Streicher, Nizam al-Mulk, Arthur Henderson, Antiochus IV Epiphanes, and Pepi II Neferkare. After him are Charles XI of Sweden, Simeon I of Bulgaria, Lev Kamenev, Mahathir Mohamad, Michel Temer, and Vlad II Dracul.