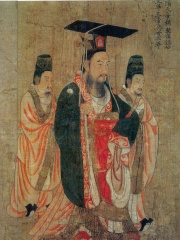 Emperor Wen of Sui (隋文帝; 21 July 541 – 13 August 604), personal name Yang Jian (楊堅), Xianbei name Puliuru Jian (普六茹堅), alias Narayana (Chinese: 那羅延; pinyin: Nàluóyán) deriving from Buddhist terms, was the founder and first emperor of China's Sui dynasty (581–618 AD). He was a hard-working administrator and a micromanager. The Sui Shu records him as having withdrawn his favour from the Confucians, giving it to "the group advocating Xing-Ming and authoritarian government." As a Buddhist, he encouraged the spread of Buddhism through the state. Read more on Wikipedia

Since 2007, the English Wikipedia page of Emperor Wen of Sui has received more than 310,977 page views. His biography is available in 35 different languages on Wikipedia making him the 1,252nd most popular politician.

Page views of Emperor Wen of Suis by language

Among politicians, Emperor Wen of Sui ranks 1,246 out of 14,801. Before him are Akbar Hashemi Rafsanjani, Friedrich Ratzel, Zhao Ziyang, Warren G. Harding, Albert Lebrun, and Emperor Kōmei. After him are Margaret Theresa of Spain, Scorpion I, Libius Severus, Joe Biden, Ananda Mahidol, and Ivan Mazepa.