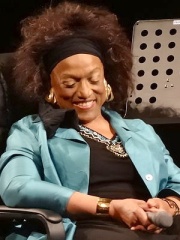 Jessye Norman (September 15, 1945 – September 30, 2019) was an American opera singer and recitalist. She was able to perform dramatic soprano roles, but refused to be limited to that voice type. She was a commanding presence on operatic, concert and recital stages, associated with roles including Beethoven's Leonore, Wagner's Sieglinde and Kundry, Cassandre and Didon by Berlioz and Bartók's Judith. Read more on Wikipedia

Since 2007, the English Wikipedia page of Jessye Norman has received more than 811,786 page views. Her biography is available in 21 different languages on Wikipedia making her the 619th most popular singer.