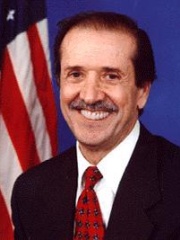 Salvatore Phillip "Sonny" Bono (; February 16, 1935 – January 5, 1998) was an American singer-songwriter, producer, actor, and politician who came to fame in partnership with his second wife Cher as the popular singing duo Sonny & Cher. He was mayor of Palm Springs, California from 1988 to 1992, and the Republican congressman for California's 44th district from 1995 until his death in 1998. The United States Copyright Term Extension Act of 1998, which extended the term of copyright by 20 years, was named in honor of Bono when it was passed by Congress nine months after his death. Read more on Wikipedia

Since 2007, the English Wikipedia page of Sonny Bono has received more than 5,505,729 page views. His biography is available in 32 different languages on Wikipedia making him the 237th most popular singer.

Among singers, Sonny Bono ranks 237 out of 3,001. Before him are Beyoncé, Tarkan, Sade, Chris Cornell, Frida Boccara, and Van Morrison. After him are Lil Wayne, Gene Vincent, Lucia Popp, Teresa Berganza, Gianni Morandi, and Glenn Hughes.