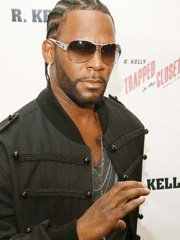 Robert Sylvester Kelly (born January 8, 1967) is an American singer, songwriter, record producer and convicted sex offender. He has been credited with helping to redefine R&B and hip hop, earning nicknames such as "the King of R&B", "the King of Pop-Soul", and the "Pied Piper of R&B".Kelly is known for songs including "I Believe I Can Fly", "Bump N' Grind", "Your Body's Callin'", "Gotham City", "Ignition (Remix)", "If I Could Turn Back the Hands of Time", "The World's Greatest", "I'm a Flirt (Remix)", and the hip hopera "Trapped in the Closet". In 1998, Kelly won three Grammy Awards for "I Believe I Can Fly". Read more on Wikipedia