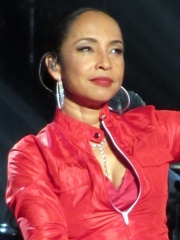 Helen Folasade Adu (Yoruba: Fọláṣadé Adú [fɔ̄láʃādé ādú]; born 16 January 1959), known professionally as Sade Adu or simply Sade ( shah-DAY), is a Nigerian-born British singer, known as the lead singer of her eponymous band. One of the most successful British female artists in history, she is often recognised as an influence on contemporary music. Her success in the music industry was recognised in the UK with an award of the Officer of the Order of the British Empire in 2002, and was made Commander in the 2017 Birthday Honours.Sade was born in Ibadan, Nigeria, and brought up partly in Essex, England, from the age of four. Read more on Wikipedia

Page views of Sades by language

Among SINGERS In Nigeria

Among singers born in Nigeria, Sade ranks 1. After her are Yemi Alade (1989).