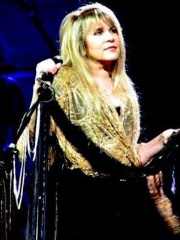 Stephanie Lynn Nicks (born May 26, 1948) is an American singer, songwriter and producer known for her work with the band Fleetwood Mac and as a solo artist. She is known for her distinctive voice, mystical stage persona and poetic, symbolic lyrics.After starting her career as a duo with her then-boyfriend Lindsey Buckingham, releasing the album Buckingham Nicks to little success, Nicks joined Fleetwood Mac in 1975, helping the band to become one of the best-selling music acts of all time with over 120 million records sold worldwide. Rumours, the band's second album with Nicks, became one of the best-selling albums of all time, being certified 20× platinum in the US. In 1981, while remaining a member of Fleetwood Mac, Nicks began her solo career, releasing the studio album Bella Donna, which topped the Billboard 200 and has reached multiplatinum status. Read more on Wikipedia