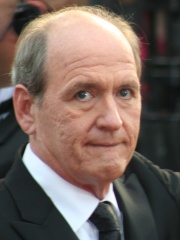 Richard Dale Jenkins (born May 4, 1947) is an American actor. Jenkins began his acting career in theater at the Trinity Repertory Company and later made his film debut in 1974. He has worked steadily in film and television since the 1980s, mostly in supporting roles. Read more on Wikipedia

Since 2007, the English Wikipedia page of Richard Jenkins has received more than 3,079,989 page views. His biography is available in 35 different languages on Wikipedia making him the 892nd most popular actor.