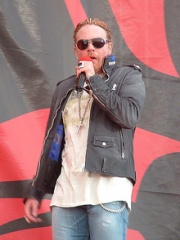 W. Axl Rose (born William Bruce Rose Jr.; born February 6, 1962) is an American musician. He is best known for being the lead vocalist and lyricist of the hard rock band Guns N' Roses, and has been the band's sole constant member since its inception in 1985. Possessing a distinctive and powerful wide-ranging voice, Rose has been named one of the greatest singers of all time by various media outlets, including Rolling Stone and NME.Born and raised in Lafayette, Indiana, Rose moved in the early 1980s to Los Angeles, where he became active in the local hard rock scene and joined several bands, including Hollywood Rose and L.A. Guns. Read more on Wikipedia