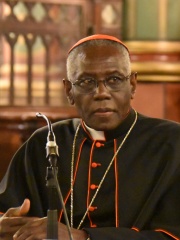 Robert Sarah (French: [ʁɔbɛ:ʁ saʁa]; born 15 June 1945) is a Guinean prelate of the Catholic Church. A cardinal since 20 November 2010, he was prefect of the Congregation for Divine Worship and the Discipline of the Sacraments from 23 November 2014 to 20 February 2021. Sarah previously served as secretary of the Congregation for the Evangelization of Peoples under Pope John Paul II and president of the Pontifical Council Cor Unum under Pope Benedict XVI. Sarah has been a forceful advocate for the defense of traditional Catholic teaching on questions of sexual morality and the right to life, and in denouncing Islamic radicalism. Read more on Wikipedia

Among religious figures, Robert Sarah ranks 958 out of 2,238. Before him are Antipope Innocent III, Praxedes, Otto of Bamberg, Paula of Rome, Ravi Shankar, and Edith Cavell. After him are Germanus I of Constantinople, Mechtilde, Petrus Gonsalvus, Ibn Sa'd, Julia Pastrana, and Vincent Pallotti.

Among RELIGIOUS FIGURES In Guinea