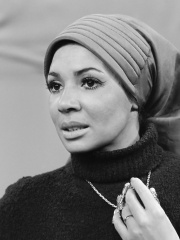 Dame Shirley Veronica Bassey, (; born 8 January 1937) is a Welsh singer, whose career began in 1953, well known for her expressive voice and for recording the soundtrack theme songs to the James Bond films Goldfinger (1964), Diamonds Are Forever (1971), and Moonraker (1979). In January 1959, Bassey became the first Welsh person to gain a No. 1 single.In 2000, Bassey was appointed a Dame Commander of the Order of the British Empire (DBE) for services to the performing arts. Read more on Wikipedia

Shirley Bassey is most famous for singing the theme song to the James Bond film Goldfinger.