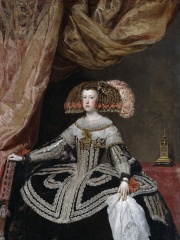 Mariana of Austria (Spanish: Mariana de Austria) or Maria Anna (24 December 1634 – 16 May 1696) was Queen of Spain from 1649 until her husband and uncle, Philip IV, died in 1665. She was then appointed regent for their three-year-old son Charles II, and due to his ill health remained an influential figure until her own death in 1696. Her regency was overshadowed by the need to manage Spain's post-1648 decline as the dominant global power, internal political divisions and the European economic crisis of the second half of the 17th century. Read more on Wikipedia

Page views of Mariana of Austrias by language

Among noblemen, Mariana of Austria ranks 114 out of 843. Before her are Sophia of Hanover, Ramesses VI, Joan of France, Duchess of Berry, Grand Duchess Olga Alexandrovna of Russia, Albert II, Prince of Monaco, and Albert, Duke of Prussia. After her are Fatma Sultan, Claude of France, Michael Andreas Barclay de Tolly, Pyotr Wrangel, Ramesses VII, and Prince Vincent of Denmark.