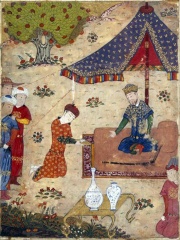 Since 2007, the English Wikipedia page of Tekuder has received more than 90,230 page views. His biography is available in 28 different languages on Wikipedia. Tekuder is the 1,995th most popular politician (up from 3,631st in 2019), the 76th most popular biography from Iran (up from 116th in 2019) and the 40th most popular Iranian Politician.

Tekuder was a Turkish scholar and poet who wrote an epic poem about the life of the Prophet Muhammad.

Page views of Tekuders by language

Among politicians, Tekuder ranks 1,995 out of 15,710. Before him are Mário Soares, Mara Branković, Khorloogiin Choibalsan, Ilham Aliyev, Alboin, and Nadezhda Alliluyeva. After him are Alexandre Millerand, Offa of Mercia, Ahmad Shah Qajar, Melisende, Queen of Jerusalem, Magnus the Good, and Şah Sultan.

Among people born in 1247, Tekuder ranks 2. Before him is Rashid-al-Din Hamadani. After him are Margaret of Cortona, John II, Count of Holland, Al-Hakim I, Ulaghchi, Yolande II, Countess of Nevers, and Obizzo II d'Este, Marquis of Ferrara. Among people deceased in 1284, Tekuder ranks 3. Before him are Alfonso X of Castile and Nicola Pisano. After him are Hōjō Tokimune, Siger of Brabant, Hugh III of Cyprus, George, Emperor of Trebizond, Peter I, Count of Alençon, Sturla Þórðarson, and Adelaide of Holland.