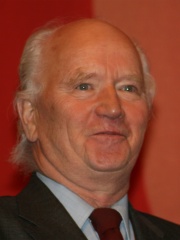 Thorvald Stoltenberg (8 July 1931 – 13 July 2018) was a Norwegian politician and diplomat. He served as Minister of Defence from 1979 to 1981 and Minister of Foreign Affairs from 1987 to 1989 and again from 1990 to 1993 in two Labour governments. From 1989 to 1990 he served as the Norwegian ambassador to the UN. In 1990, he became the United Nations High Commissioner for Refugees but served only one year before he rejoined the Norwegian government. Read more on Wikipedia

Among politicians, Thorvald Stoltenberg ranks 6,565 out of 15,710. Before him are Bolesław IV the Curly, Malcolm I of Scotland, Christian I, Prince of Anhalt-Bernburg, Friedrich Karl Ludwig, Duke of Schleswig-Holstein-Sonderburg-Beck, Robert Devereux, 2nd Earl of Essex, and Dominique de Villepin. After him are Étienne Charles de Loménie de Brienne, Fatmir Sejdiu, Anna of Brandenburg, Gavril Radomir of Bulgaria, Abdal-Latif Mirza, and Michael of Chernigov.