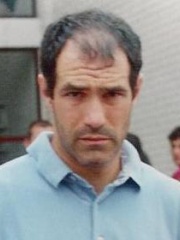 Andoni Zubizarreta Urreta (Basque pronunciation: [andoni s̻uβis̻areta ureta], born 23 October 1961) is a Basque former professional footballer who played as a goalkeeper. The all-time most capped player for the Spain national team for several years, he played with individual and team success for Athletic Bilbao and Barcelona (eight years with the latter, he would later work with the club in directorial capacities), appearing in more than 950 official professional matches during his club career and holding the records for most appearances and clean sheets in La Liga for several years.Zubizarreta represented Spain in seven major international tournaments, four World Cups and three European Championships, starting in six of those. Read more on Wikipedia