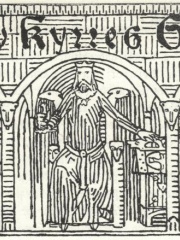 Olaf III or Olaf Haraldsson (Old Norse: Óláfr Haraldsson, Norwegian: Olav Haraldsson; c. 1050 – 22 September 1093), known as Olaf the Peaceful (Old Norse: Óláfr kyrri, Norwegian: Olav Kyrre), was King of Norway from 1067 until his death in 1093.He was present at the Battle of Stamford Bridge in England in 1066 where his father, King Harald Hardrada, saw defeat and was killed in action, an event that directly preceded his kingship. During his rule, Olaf made peace with regards to earlier royal conflicts with the church, strengthened the power of the monarchy, and is traditionally credited with founding the city of Bergen circa 1070. Read more on Wikipedia

Olaf III of Norway is most famous for his conversion to Christianity.

Page views of Olaf III of Norways by language

Among politicians, Olaf III of Norway ranks 3,552 out of 15,577. Before him are Emund the Old, Karim Khan Zand, Georges Ernest Boulanger, Louis William, Margrave of Baden-Baden, Helenus, and James Macpherson. After him are Alfred Moisiu, Niceto Alcalá-Zamora, Karl Lueger, Miguel Díaz-Canel, Emperor Huan of Han, and Emperor Ping of Han.