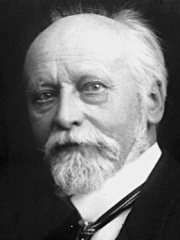 Ludwig Quidde (German pronunciation: [ˈluːtvɪç ˈkvɪdə] (listen); 23 March 1858, Free City of Bremen – 4 March 1941) was a German politician and pacifist who is mainly remembered today for his acerbic criticism of German Emperor Wilhelm II. Quidde's long career spanned four different eras of German history: that of Bismarck (up to 1890); the Hohenzollern Empire under Wilhelm II (1888–1918); the Weimar Republic (1918–1933); and, finally, Nazi Germany. In 1927, he was awarded the Nobel Peace Prize.Born into a wealthy bourgeois merchant family, Quidde grew up in Bremen, read history and also got involved in the activities of the German Peace Society (Deutsche Friedensgesellschaft). In his younger years he had already opposed Bismarck's policies. Read more on Wikipedia

Ludwig Quidde is most famous for being the first person to coin the term "First World War" in 1915. He did this because he felt that the war was not a fight between two countries, but rather a fight between the poor and the rich.

Among politicians, Ludwig Quidde ranks 3,872 out of 15,710. Before him are Antiochus IX Cyzicenus, Ante Marković, Prince Leopold, Duke of Albany, Parysatis II, Grimoald the Elder, and Gracia Mendes Nasi. After him are Joseph Süß Oppenheimer, Maria Teresa, Grand Duchess of Luxembourg, Princess Mafalda of Savoy, Zhu Rongji, Rafael del Riego, and Ashur-uballit I.