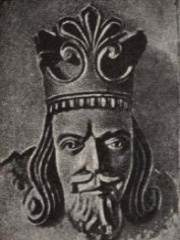 Magnus Haakonsson (Old Norse: Magnús Hákonarson, Modern Norwegian: Magnus Håkonsson; 1 (or 3) May 1238 – 9 May 1280) was King of Norway (as Magnus VI) from 1263 to 1280 (junior king from 1257). One of his greatest achievements was the modernisation and nationalisation of the Norwegian law-code, after which he is known as Magnus the Law-mender (Old Norse: Magnús lagabœtir, Modern Norwegian: Magnus Lagabøte). Read more on Wikipedia

Since 2007, the English Wikipedia page of Magnus VI of Norway has received more than 127,963 page views. His biography is available in 35 different languages on Wikipedia making him the 1,553rd most popular politician.

Page views of Magnus VI of Norways by language

Among politicians, Magnus VI of Norway ranks 1,544 out of 14,801. Before him are Chenghua Emperor, Boris I of Bulgaria, Miguel Primo de Rivera, Xuande Emperor, Cevdet Sunay, and Robert Ley. After him are Amaro Pargo, Louis Mountbatten, 1st Earl Mountbatten of Burma, Jehu, Alexander Lukashenko, Genrikh Yagoda, and Leo II.

Among people born in 1238, Magnus VI of Norway ranks 1. After him are Michael II Asen, Otto IV, Margrave of Brandenburg-Stendal, Yang Hui, Meinhard, Duke of Carinthia, and Nizamuddin Auliya. Among people deceased in 1280, Magnus VI of Norway ranks 3. Before him are Albertus Magnus and Pope Nicholas III. After him are Orda Khan, Margaret II, Countess of Flanders, Al-Said Barakah, Drogön Chögyal Phagpa, Guan Hanqing, and Yolande II, Countess of Nevers.