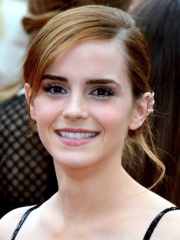 Emma Charlotte Duerre Watson (born 15 April 1990) is an English actress and activist. She has gained recognition for her roles in both blockbusters and independent films, as well as her women's rights work. Watson has been ranked among the world's highest-paid actresses by Forbes and Vanity Fair, and was named one of the 100 most influential people in the world by Time magazine in 2015.Watson attended the Dragon School and trained in acting at the Oxford branch of Stagecoach Theatre Arts. Read more on Wikipedia

Emma Watson is most famous for her role as Hermione Granger in the Harry Potter film series.